Well the Summer series is well and truly over and we have completed the first month of the Autumn Series!  Now that we are into November please remember the club rule that wetsuits or drysuits must be worn now through to the end of March.

The clever ones in the club will have realised we have only been sailing 2 races on Saturday and Sunday giving plenty of time for boat maintenance at the end of the day, or in case of the Mirror Fleet, more drinking time.

Lucinda has been busy getting the results up to date.  I must admit I was a little surprised when I saw the current standings as I expected to see a Solo domination.

Current leader is “Tippy” Tim Mardon in his Laser followed by Cole Briscoe second and Ann and myself in a Lark.

Top silver fleet is Mike Evans with a helpful string of third places.

Andy Ward and Frank Zhu are battling it out for first in the Bronze fleet with only 2 points separating them.

The leading Mirror is Brian Nicholson.

Well, the Solos are back in at the top in this series.  First is Cole Briscoe followed by Barrie Woodall.  Following up in third place is Pete Smith (Phantom) who still can’t decide which sail to use, is it the black one, or the gold one?….so many choices!

Those around on the 22nd October will know there were quite fierce conditions recorded and on the day there was a very notable performance put in by Frank Zhu who came in third despite a lot of last lap capsizes.  Frank has asked me not to mention that he was using a 4.7 junior’s sail, so that will be our secret.

Please remember that the full results for the series will be on the club notice board and on the website. See link below:

October has been a busy month for our Juniors.  Harry Marlow and the Cawthorne Clan put in an appearance at the Optimist End of Seasons in Weymouth.  As a result of their performances Harry and Scarlett managed to gain places on the squad training at Grafham Water during half-term, meanwhile Oscar had training at Draycote.

On Saturday 14 October, 5 boats raced for the much prized Terry Booth Trophy.  Terry was a top flight club sailor and was a founder member of SSC.  I am sure Terry would have been proud to have seen the youngsters battle it out.  Marie Booth came along to the club to present the prizes.  The final results after two races were:

In the Autumn Series it is also worth mentioning that Annabel Thornton came in 3rd in last week’s Saturday race.

Saturday 4th November sees Race 4 of the Club Championship.  This will be the Commodore’s Cup.  The Cup will consist of two pursuit races which will be at normal club racing times, i.e. 11:30 and 13:30 with prize giving on the day.

Following that will be the Bonfire night with the usual hot food from the galley. Admission is free with one large firework.  This year could be interesting as Chris Padro was talking about a London style display involving letting off fireworks from the Committee Boat.  I understand Trish has increased Chris’s life assurance cover and I think we may be looking for a new committee boat after Saturday!

The current placings of the Club Championship are as follows: 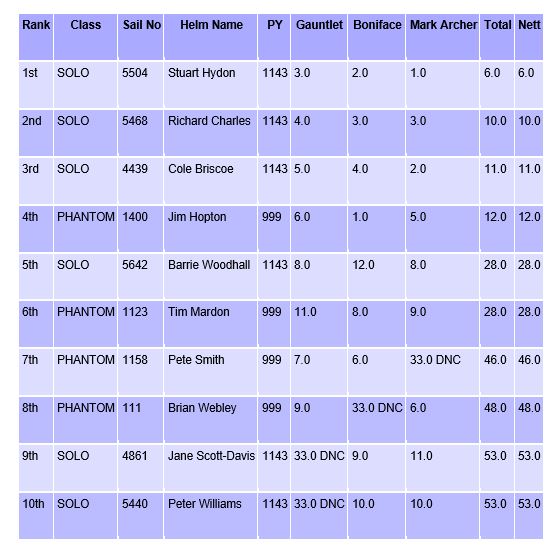 During October SSC has hosted two open meetings, both two day and both alongside normal club racing.  These were both highly successful and the club received many thanks for being amongst the friendliest clubs.  Thanks go to all those helping to make our guests feel welcome and looking after them. 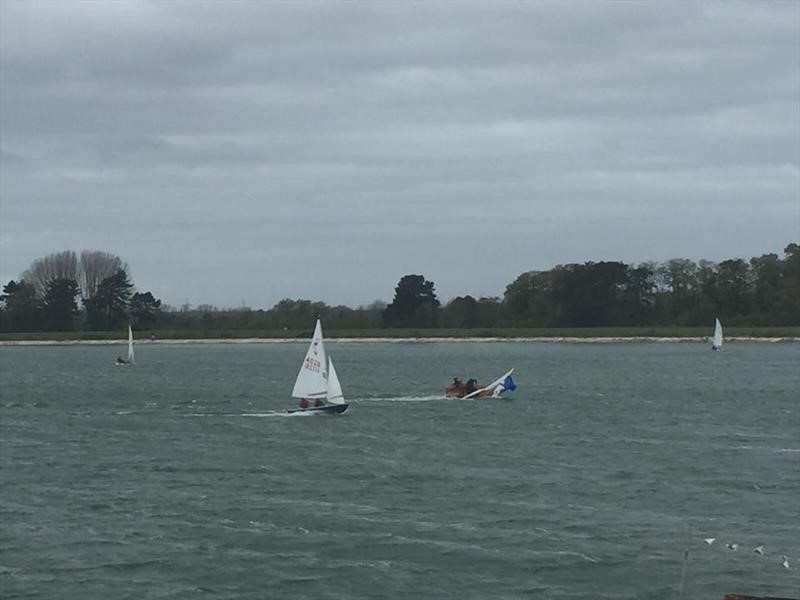 Lark Masters and Open Meeting – Salcombe.  Stuart and Ann represented Shustoke albeit in different boats.  Stuart finished 4th in the Masters crewing for local sailmaker Bob Suggitt, rekindling an old partnership from the 1980’s.  It would have been second if Bob hadn’t jumped the line at the start and received a disqualification in the first race when they finished second.  Some habits die hard!  The photo below shows the tightness of the start line. 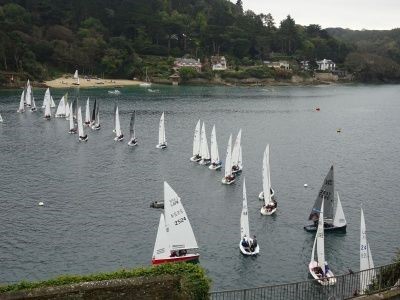 There were 35 boats competing and Ann finished 29th.  The evening saw 100 guests for the black tie dinner.  Sunday was the open meeting and Stuart swapped with Bob to helm.  Stuart and Bob won the meeting with Ann and Glen Enkle finishing 7th showing much improvement from Saturday.

Lark Winter Championships at Northampton SC 11/12 November.  Old teams Stuart and Nick have teamed up once again to defend the title.  Ann Biglin will be sailing with Glen Enkle from the east coast.

Sunsail “Round the Cans” – Adrian Padro has qualified to take part in the final following the knock out stages.  Best of luck Ade!  The event is taking place on Saturday 11 November somewhere in the Solent!

Sailjuice Series – Draycote Dash 18/19 November 2017.  Stuart and Ann will be sailing a Lark together in this, the first of the winter Sailjuice series.  There are normally in excess of 150 entries!

Those out sailing last weekend will have seen the start Racing Course run by John Dransfield and Jane Scott Davies.  It seemed very successful, but wonder whether John was potentially considering changing classes as he was spotted sailing an Oppy!

Please remember the autumn training events which Jane has organised.  Interestingly people attending the opens have asked if they can join in so you may see some new faces on the days.

On Wednesday 22 November 7pm “Fromage Fun and a Day’s Sailing with Robin Webb”.  The cost is £5 for the Cheese and Wine (including some alcohol free). Please can you sign up in the club house or contact Ann Biglin?  Robin is also a longstanding club member having been in the sailing industry for a number of years.  He also competed at Worlds level including some fantastic results in San Francisco, but we’d better let him tell you about that…